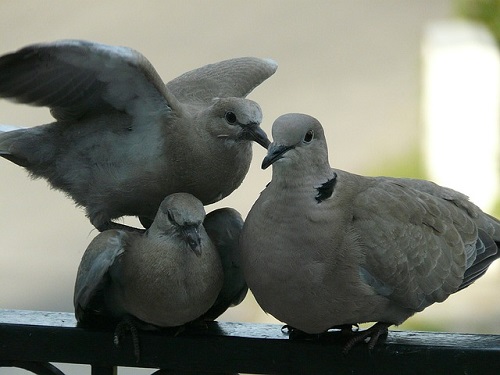 Today is about peace. Peace is something that is often hard won. Peace doesn't mean there aren't challenges to deal with. I think some people think peace on Earth would be like the ideal image of heaven. For that to happen, every man, woman, child, and animal would have to be nothing like we are now. The part of all of us that is animal would have to cease to exist. Even domesticated animals attack now and then.

I don't think a world without challenges would be good to live in. Even Star Trek, which has elements of a utopia, is full of problems. Maybe the regular folks living on the ships that aren't Starfleet officers don't notice much in the way of problems. I often wonder what the civilians do. Most domestic chores are done by the computer. It's not unreasonable to think that if food can be created, why not uniforms as well? Do they just read books and play?

Even in peace time, there is still life on Earth. Many times things don't go remotely according to plan.

I was seeing someone for a bit. Everything seemed to be going well and then it just wasn't. We had made some plans and those are all off. That sucks, but it is what it is. I could spend my time moping and hating the world/him/men or I could move on. Not that I don't have to wait a bit because while I might be ready to date, life decided it was time for me to catch the flu just as I was planning to get my flu shot.

I went back to school this year to change careers because I hated what I was doing. It was killing my soul. It was going great and then the strike happened.

Here's the thing about the strike though. A lot of stuff can get done without our teachers. Teachers don't read our textbooks for us. They don't write up our assignments either. They mark stuff. They clarify things. They demonstrate some things. Still, I can do probably about 60% of my work, maybe more. That's a lot more than 0. Or I could decide the semester is a wash and withdraw or let myself fail once we finally get back to the classroom.

Yeah, we paid for them to teach us, but those plans are currently off the table. I could whine about it or I could take charge of what is in my realm of control. Besides,
being able to learn on your own will get you far in life.

Many of the people in my classes have continued doing their assignments. Some are more on the ball than I am, but most of us aren't giving up. I'm still behind in readings, but I've been working on the things that are worth marks.

I got my first act written for my screenplay, but there's a problem. I'm done 10 pages too soon. Screenplays are more precise than novels. Ten pages is a big deal because that translates to about 10 minutes of time lost. That wasn't my plan. So I'm checking out professional scripts to get an idea for where I've messed up. Part of it is lack of description. That is my ongoing writing problem currently, so I'm not surprised there. Another thing I noticed was that I haven't gotten everything formatted the same. Most scripts leave more white space. No one likes reading large paragraphs in a screenplay.

It's NaNoWriMo and I'm sick. It sucks, but I'm writing anyway because what else am I going to do while lying in bed all day? I take naps and Netflix breaks to rest.

There are always barriers to doing anything. Hell, I just wanted to check my temperature on Friday, but my thermometer's battery finally ran out. I had to go to the store for food anyway, so I got a new battery to keep an eye on my temperature.

I either bust through blockages or go around them. There's always something that can be done. I guess I'm just not one for making excuses.

I feel like the best way to bring more peace into my life is to avoid unnecessary political discussion, chase the things I'm passionate about, and roll with things when I need to.

But I think complete peace would feel like death. If everything came to me easily, I'd be bored and hate living. Of course, I'd like a few things to be easier, but I wouldn't want everything in my life to be peaceful.