My Pride Journey - Part I 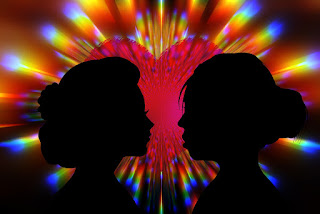 Happy Pride Month to all those celebrating!

I'll be somewhat brief this year, but suffice it to say that it took me a long time to figure out this piece of myself. For many years, I just thought I was on the asexual spectrum. This is partly because I had a number of things to heal from, which had left me emotionally numb in a lot of ways.

The pandemic gave me the time that I needed. It also brought with it the opportunity to do Cognitive Behavioural Therapy (CBT) as the cost was covered by the province and I couldn't go out anyway. The model wasn't for everyone. It was a split between phone conversations and online work. The early modules were full of things I already knew from my diploma in Social Work. Perhaps that made it easier for me to go through it in a non-traditional setting or perhaps it was my background in I.T. that made it work just fine for me. Whatever the case, I'm really glad I seized that opportunity. As far as I know, it's still an option for anyone who wants to use it.

It was about six months after that, when I was window shopping online for clothing, that I noticed the change in myself. The models were all so hot that I felt alive in a way I never had prior to this. I just thought people were generally good looking or not and usually just ended up dating someone partly because of common interests and a chemistry that eventually built after getting to know them for a while and a need to "scratch an itch."

I defaulted to men partly because society is so full of heterosexual narratives and because I witnessed quite a bit of homophobia as a teen in the 90s. I always had gay friends, but never thought of it as an option for me. This is probably also partly due to attending Catholic school as a child.

Anyway, there's a thing LGBTQ+ people refer to as "gay puberty." A lot of us never had those experiences as teens. Us late bloomers that is. Basically, we go through some of those things later on. One day, I found myself in the LCBO having to tighten my grip on the bottles I had while a beautiful woman walked by or they were going to smash on the ground.

Previous to all this, I often felt like some part of me was broken or missing. I chuckled when I learned this about myself. "Oh, I'm just gay," I thought.

Now I'm in a whole different world in some ways. Seriously, it's not easier trying to date women. It's differently weird and complex, but at least I'm fishing from the right pond for me now. That should help, right?

There's a lot more I could say, but I think I'll leave that for another time.