January 30, 2022
My city is under attack. I wish I was being facetious.
The so-called "freedom" convoy is here and so far this is what has transpired:
1. They parked on the war memorial. These people who call themselves patriots. This is where the Unknown Soldier rests. This is where Corporal Nathan Cirullo lost his life in October of 2014. The cars were towed, but who knows what actual repercussions they will face. 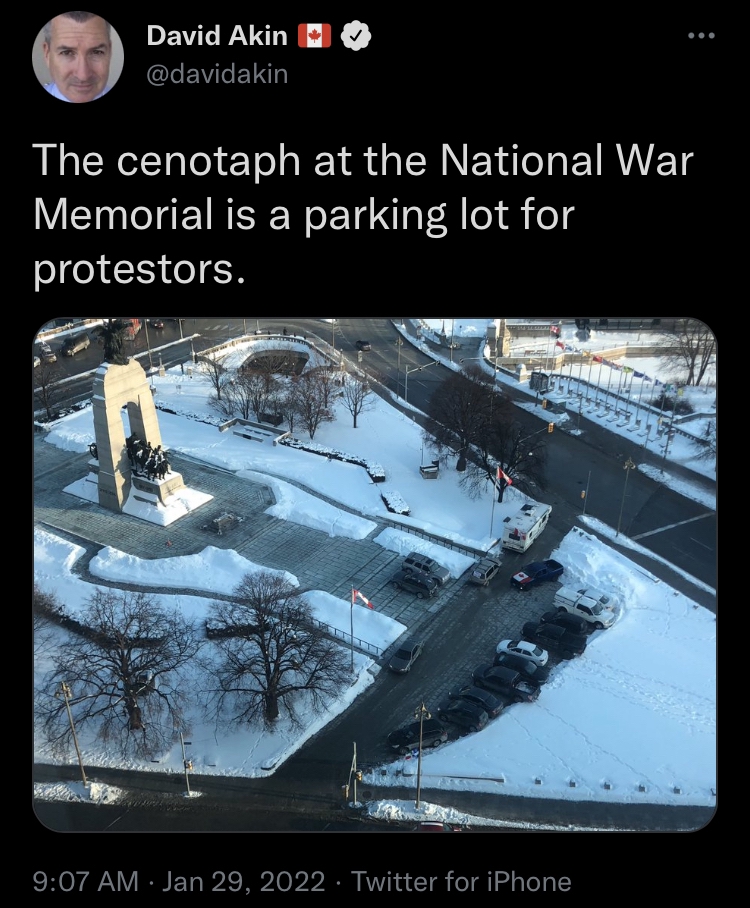 2. Later, when asked to move away from memorial, one stood and jumped on the tomb itself while others cheered.
3. Despite having port-a-potties provided for by the mayor, they've been defecating on Parliament Hill, in snowbanks, and on streets nearby.
4. Flags being flown include the Confederate flag of the United States, Trump flags, the Quebec equivalent to the Confederate flag, upside down Canada flags, regular Canada flags, Fuck Trudeau flags, libertarian flags, and ones adorned with swastikas. Yeah, this is totally about freedom rather than racism, white supremacy, and hate. Meanwhile, many of the organizers are from alt-right groups.
5. None are wearing masks. Why? Well many seem to be in denial that Covid is a threat or even real.
6. They dressed up the statute of Terry Fox like some sick mascot. Twice. Terry Fox believed in science so strongly, he ran a marathon across Canada to raise money for Cancer research. 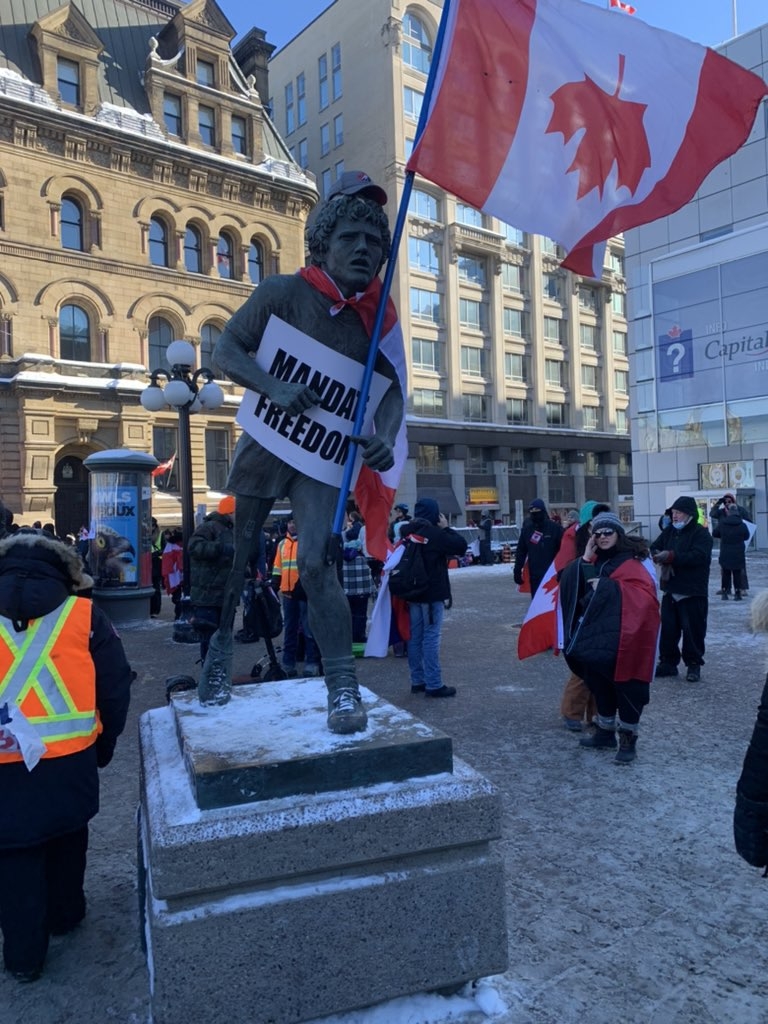 7. Rideau Centre had to close down because they were accosting employees. Some even tried to forcibly remove the masks from those employees because they want to free everyone from masks. 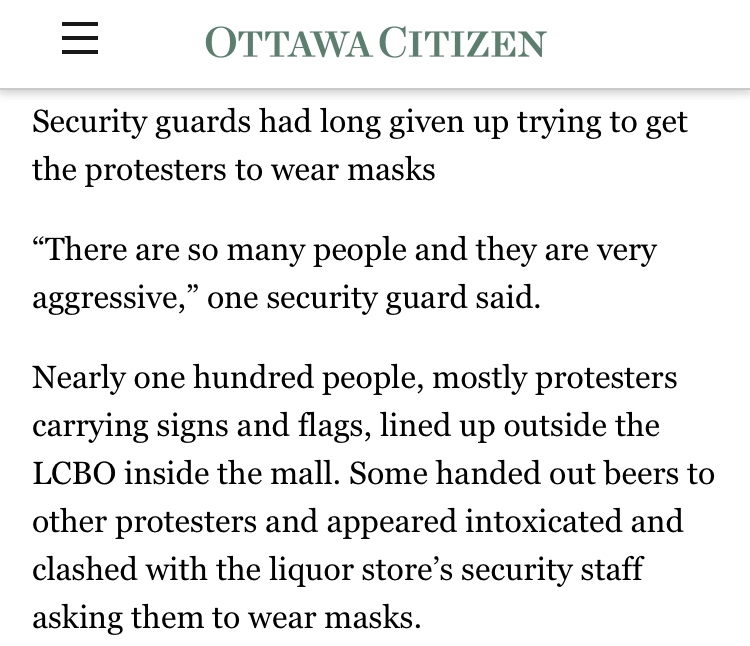 8. They've been leaving their empty vehicles idling for far longer than legally allowed. They obviously don't care about the environment. This I saw myself during a Zoom meeting.
9. They harassed the soup kitchen.

10. Some have advocated for civil war. For some, they want Trudeau to resign or the Covid mandates to end. The US is mandating that border crossers be vaccinated, so even if Canada changed that, they still wouldn't be able to cross.
11. Local neighborhoods are being terrorized by truck horns, drunken protestors looking for fights, and firecrackers being set off wherever they feel like it. Some have set their vehicles up to sound like ambulances. Oh, and someone was flying a helicopter around in a no fly zone. There are many of these accounts from people living in the area.
12. The area is gridlocked so badly that police have had to drive on the sidewalks. If any emergency happens, it'll be very bad. This I saw myself during a Zoom meeting.
13. A small number of counter protestors were met with some violence. One had their coat ripped. Another had their camera equipment broken. 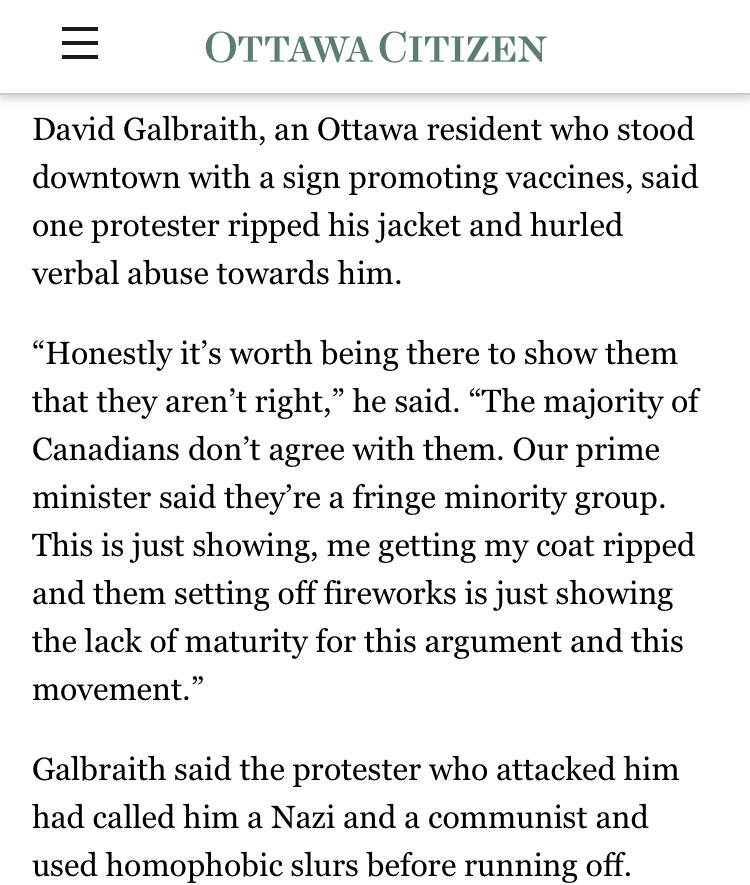 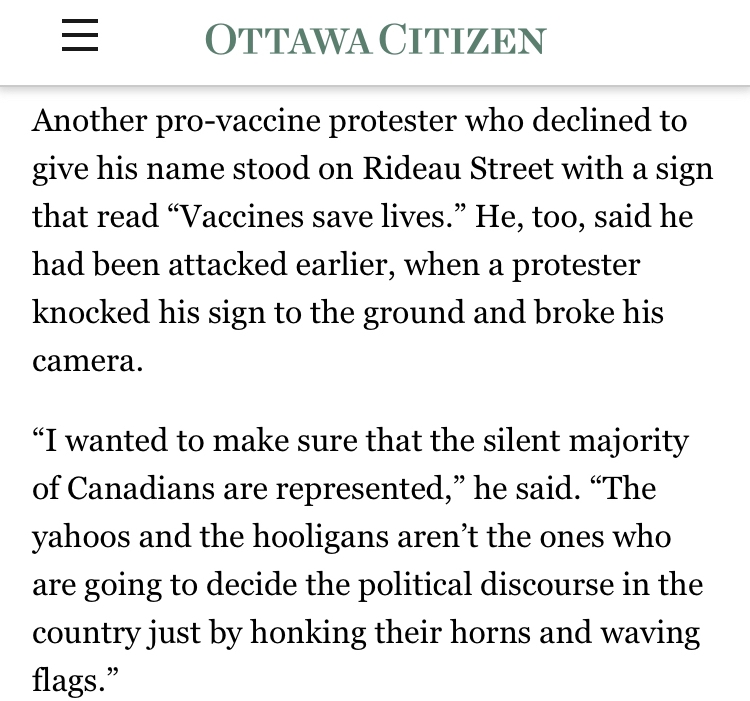 14. Some people were shot with BB guns. This is the only event I haven't found a source for, but I've chosen to include it anyway.
This is all from Day One.
A major point that has been overlooked by them is that health mandates are largely provincial, not federal. They're protesting the wrong government for a lot of the items they list.
I want to take this time to thank the truckers who aren't in favour of this sham of a protest. The ones who continue to fix our supply chain issues.
At this point, I'm already exhausted and will spend the day doing things I find more calming.
Sources:
https://www.cbs17.com/news/thousands-protest-covid-mandates-and-restrictions-in-ottawa/
https://ottawacitizen.com/news/local-news/trucker-convoy-more-trucks-expected-on-saturday-traffic-impacts-expected-to-worsen
https://ottawacitizen.com/news/local-news/defence-chief-criticizes-protesters-for-dancing-on-national-war-memorial
https://www.salon.com/2022/01/29/canadas-freedom-convoy-is-this-jan-6-for-the-great-north/
https://www.ctvnews.ca/health/coronavirus/a-look-at-canada-s-vaccine-mandates-and-public-health-restrictions-1.5757218
https://globalnews.ca/news/8543281/covid-trucker-convoy-organizers-hate/
https://www.reddit.com/r/ontario/comments/se8sn7/jan_2022_truck_convoy_megathread/