December 31, 2021
They're a little bit messy, but here are my current plans for the first quarter of 2022. I've been wanting to get into using my Rocketbook instead of paper planners, but I had barely used the planner I had and didn't want to waste it. Well, I think being at least halfway through it is more than reasonable at this point. Eventually, I'll digitize my old planners to clear that clutter, but there isn't a rush on that as I'm more concerned with the loose sheets of paper elsewhere.
I need to do about 7 chapters a month to get the edits done on Sparker. This is possibly too ambitious, but I'm going to try my best. It's important. I want to spend the rest of the year deciding on publishing. I was originally going to try querying, but Jenna Moreci's last video has so many excellent points on what made her decide to self-publish, so I think I've finally learned what I needed to make that decision. I intend to go with either Friesen or Tellwell. 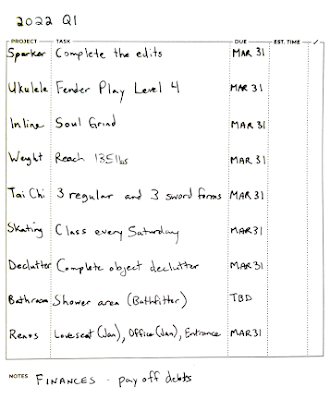 Hopefully, my ice skating class doesn't get cancelled because of Omicron. I'm really looking forward to it! It's an intermediate level class. Here is the description:

Also, hopefully my plans for aggressive inline won't be interrupted. If the skatepark has to close down for a bit, it is what it is. I actually hate that platitude because usually there is a way around obstacles, but a pandemic is a whole different challenge. My new USD skate boots came and I'm excited to get skating with them. For now, I've been putting them on to get used to the weight of them and I'm wearing them while doing leg raises. One of the skaters I enjoy following is Fabiola da Silva and the other day she posted a video on Instagram showing some of the off-skate exercises she does and I'm going to work toward those as I need to strengthen my legs.

A lot of my plans currently shouldn't be impacted by this latest Covid scare. Because all the Tai Chi places are still shuttered, I've acquired DVDs and books to work on Tai Chi myself. I've been wanting to do it for a long time, but the classes used to be during lunch hours on the other end of the city. Now they have evening courses on the schedules at several places, but none are teaching. Well, I'm making it happen anyway! I'm sure I'll need refinements later, but at least I'll be moving forward. I've been trying to get fitness in and Covid has been a continual issue. I've chosen the Yang style for now as it is the most commonly practised style in Ottawa.
I'm annoyed that the bathroom is still a thing in 2022, but I can't do anything to speed things up. They have to manufacture the tub liner and wall system and the installer has to be available. Due to the bathroom taking so long, I had started two other projects that I want to finish early on in the year. After that, there is a small reno I want to do to my entrance. I have flooring left over from the kitchen and I will be taking up some of the parquet in the entrance and replacing the parquet with a waterproof floor that is easy to maintain. It just makes much more sense. The only thing I'll need to buy is the transition strip because I have leftover flooring from the kitchen. I need the transition strips for the kitchen anyway. Not only will this be better with winter boots, but it will hopefully help keep the sand in the entrance instead of it getting everywhere else. The joys of the open concept home.
Some of my continued goals aren't listed there. For example, I intend to continue blogging at least once weekly, but instead of just listing off my goals, I want to talk about what excites me and why. Expect to see more posts on skating, music, gaming, and writing.
As always, you can check my progress on my publicly accessible Trello board: https://trello.com/b/RM8yD3eq/rae-roy-general