Near the end of last week, I acquired a cold and cough that progressively worsened as the weekend went on. After driving south, Oshawa became my home for the duration of the weekend, which began with The Great Bun Crisis. Thankfully, that was assuaged by an emergency trip to Costco. Celebratory pho was made extra tasty and complemented by great conversations.

Day one had us travel into Toronto for the seminar, which taught us the format and rules for the tournament. We also got feedback on where we could improve. Some were kata specific and others were more general. A tip I received was to square my hips, for example.

They mentioned my group would be competing around 11 AM the following day, so I believed I had plenty of time to mentally prepare.

Dinner at an all you can eat sushi place was very enjoyable. As is common with all you can eat, you might not get some of the dishes you ordered, but because ordering was done by iPad, no one went hungry waiting on a server to take the next order.

The next day, The Missing Bread Mystery began. I had baked a loaf of gluten free, egg free, dairy free, yeast free bread for my breakfasts on Thursday night. It was tasty and then it was missing. I couldn't remember leaving it where the dog had access to it, but there were crumbs, so by deductive reasoning, the mystery was solved. Breakfast wasn't as I pictured for the weekend, but I had enough food to survive.

We arrived with little time to spare. I barely got my sword oiled then was rushed out to line up by dojo. I figured out at the last moment that I was to start my own line as I was the only one from my dojo there.

During the opening remarks, they spoke of Maehara Sensei and I wanted to cry. Though I only met him once, he made a lasting impression. He visited us from Japan last May seminar. He was so funny and expressive. Indeed, we barely required any translation. He showed us so much using only body language and one of the few English words he knew, "No!" Sadly he has since passed away.

About 10 minutes after, I was ushered onto the floor to compete. My nerves got the better of me and I made some silly mistakes like not waiting until the head judge said Hajime. In practice at my dojo, I had completely forgotten to bow to the judges due to nerves. One of the key elements of this art is to remain calm under pressure, so this is an area I need to work on. I was also nervous because I knew the skill level of the person I was up against and I let that worry me.

I felt like I did pretty awful given the amount of corrections I received over the weekend, so I was in utter shock when I received a bronze medal in Shodan Division. 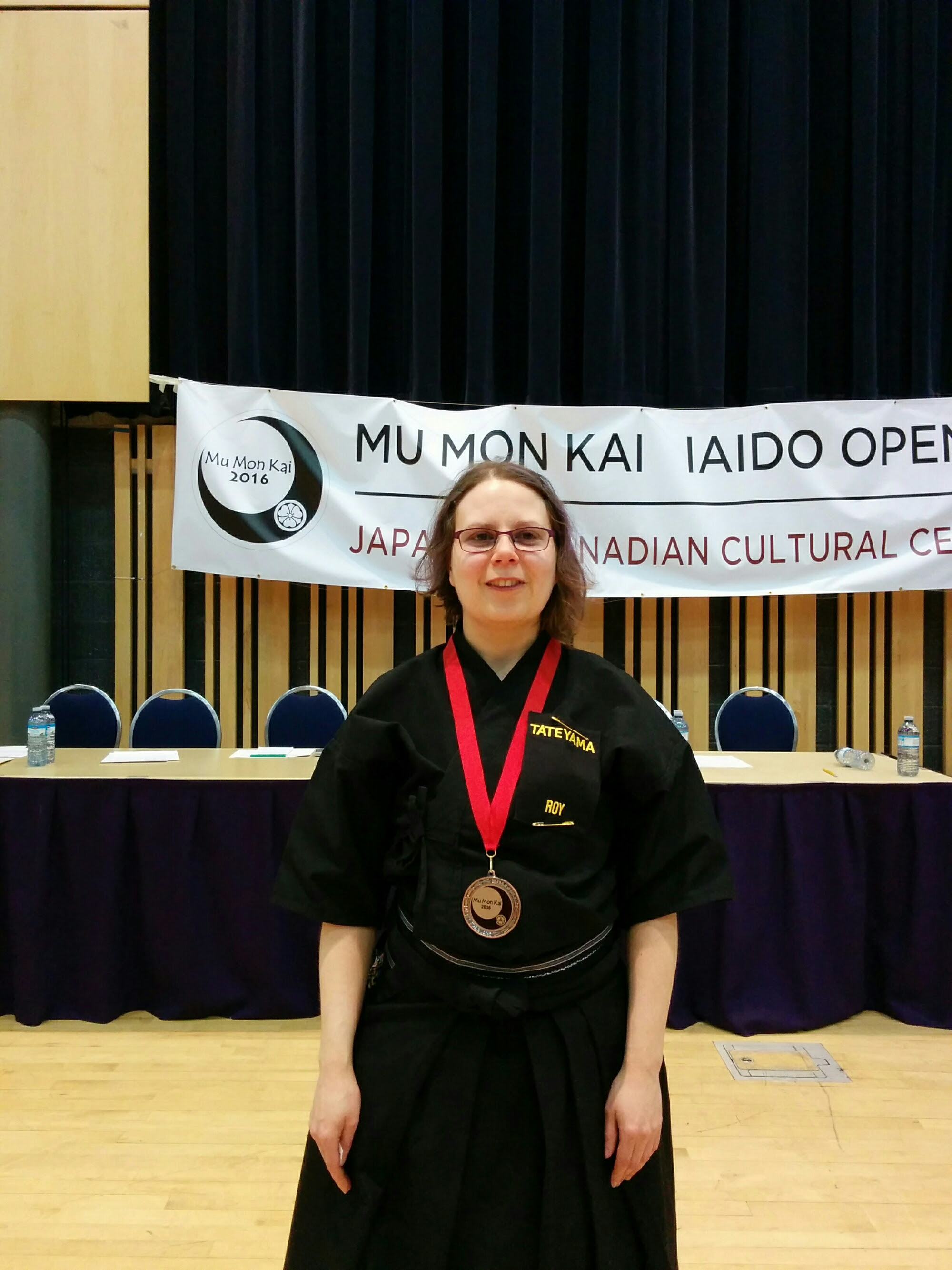 Me after winning my first medal.[/caption]

The truth is that it all comes down to depth of practice. I'm going to work on those corrections and practice more. Especially my hips. Perhaps the next competition will have a different outcome.

While I'm happy I won a medal, indeed my first one ever, the lessons learned over the weekend were the most valuable. Those I will carry with me forever.

The weekend was capped off with Chinese food, a hot tub soak, and the Game of Thrones season premiere.

This week I will be at work for only 3 days then it's off to Ad Astra in Richmond Hill. I will attempt to bake bread again and as no one but me will have access to my hotel room, I expect this to be more successful. I don't know what panels I will be attending yet as the schedule isn't up. Perhaps I'll go through the list and rank them to make the selection process easier as the days get closer.

January 09, 2020
A legend in the roller derby community is gone. How and why, I do not know. What I do know is that many are reeling from the news, myself included.  Hanna was known for big hits and a brilliant personality. I experienced her hits first hand as she sent me flying a number of times. Then she'd smile and make sure I wasn't hurt.  I stumbled onto this clip on Youtube from 2012 and I think it shows Hanna as many knew her. She was a force off the track too. As a cofounder of the award-winning Top Shelf Distillers , she gave much to the surrounding Ottawa Valley community.   Hanna was a relatively petite woman and it was she who taught me that I could be mighty despite my size. I wouldn't be the woman I am today if I hadn't had the pleasure and the privilege of sharing the track with her.  I'm shocked. I'm sad. I'm upset I'll never see her or speak to her again.  R.I.P. #10. Rae-Rae
Post a Comment
Read more