May 24, 2017
The 2017 Sei Do Kai Spring Iaido and Jodo Seminar had a slightly different feel for me this year. I think this was because some of my friends weren't there and also because I was challenging for ikkyu rank in jodo. Normally, I just do iaido and don't have a grading to think about, so the whole weekend is just learning and fun. It was hectic trying to fit in both arts, but it I felt it important to do so.

After checking in, I spent some time fighting with the Wi-Fi, which was something new this year. The page was automatically scrolling me down to the portion for people who already had logins rather than letting me register. Then it was telling me I needed an app and it was a mess. I got it working, but missed a chance to play with a Nintendo Switch. The Wi-Fi was a pain in the butt as it kept cutting out and we had to login again when it did that. Not sure why they couldn't just let it work the whole time.

I had everything I needed with me this year, so I had no need to go to the store for provisions. My suite was 3.2 and I wasn't far from any of the party areas. There's a strangely textured wall in the suites. I haven't figured out its purpose. Maybe it's just supposed to look artful. The beds, as usual, felt about as soft as these walls.

There was also a light-switch in the one bathroom that was the colour of poop. Sometimes I wonder who makes these design choices.

Friday was spent doing a mixture of socializing and helping out before heading off to the Shakespeare Arms. Their new gluten free menu is delicious. I found the curry to be the best I've had in a long time. Also, never has a Somersby hit the spot so well after running around and working up a thirst.

Day 1 officially began at 8:30 A.M., but we had to wake up and eat before then. We didn't really start until about 10:00 A.M. as there were announcements and other formalities to attend to first like T-shirts. Lunch time had me running back to the dorms to make myself a grilled cheese, which was delicious. A dojo mate accompanied me. I ate much better this year. I grabbed my auction items, two anthologies, and placed them on the table. I mainly did jodo except for the free practice period where myself and a dojo mate snuck over to the iaido gym to get some sword swinging in. It was a short time, but my quads felt it the next day. We actually got to film each other to help us see where our problems are and I found that really useful. Our jodo sensei were Mansfield and Buxton from the UK and I thoroughly enjoyed their teachings. We also got to watch Mansfield Sensei take on an 8th Dan from Japan and he was dripping sweat by the end. We learned kata 11, which is one of the longest budo kata I've seen. There are many pieces to it and it was fun. The day went until around 6:00 PM, but some of us left early rather than doing another free practice session.

After showering, I cooked myself a hamburger and brought it and salad down to the auction where I ended up winning large sake cups and a hat. A friend also gifted me a beautiful coffee mug. I didn't drink much because I had to grade the next day. There were some shenanigans at the auction that had everyone at my table laughing. Someone was encouraging one person to bid on everything. From across the room. We though the heckler may have been drunk after having basically moonshine in sake form, so someone nearby told him to sit on his hands to prevent himself from bidding on things he didn't actually want. I had a taste of that booze and it was potent stuff.

Day 2 had us start at 9:00 A.M., which was marginally better. We trained hard all day and were paired up for grading, which began at 5:00 P.M. I took my lunch down to the Peterborough group's room and ate with friends. They accused me of being a traitor for taking up jo, but it was all in good fun. Hopefully, I can visit them in the summer sometime.

Grading began around 5:00 P.M. The rules were told to us while we were lined up and waited to begin. I and my partner were in the first group and ended up right in front of the judges' table. Talk about extra pressure! I was quickly able to forget about them and only focus on my partner, which was important as he was trying to hit me with wooden weapons. After switching sides, while my partner defending against my attacks, I realized I couldn't remember if I had done the right thing at all, but I held it together because I was able to tell myself what was done was done. Of course, adjustments were made on the fly and some of the formalities were skipped, which left us fearful that we had failed to do things like not turn our backs to the judges. Then we were ushered to the back of the room, which was the furthest point from the door.

Originally, my dojo mate and I were planning on leaving shortly after our own gradings, but we didn't have that option. As I sat there though, I realized that this was an extra special occasion and we were fortunate to be seeing the high level gradings. Our jodo sensei, iaido sensei, and several others we knew were challenging as well. Grading took us to around 8:00 P.M. and we went back to the dorms to change without bothering to shower. I baked my pizza and got my booze and games and headed down to the potluck where I learned that I had passed. I'm short, so that's why it's at a funny angle. I'm not 2 apples high, nor do I have hairy feet as some may have suggested, but it was good I didn't have more to drink anyway. 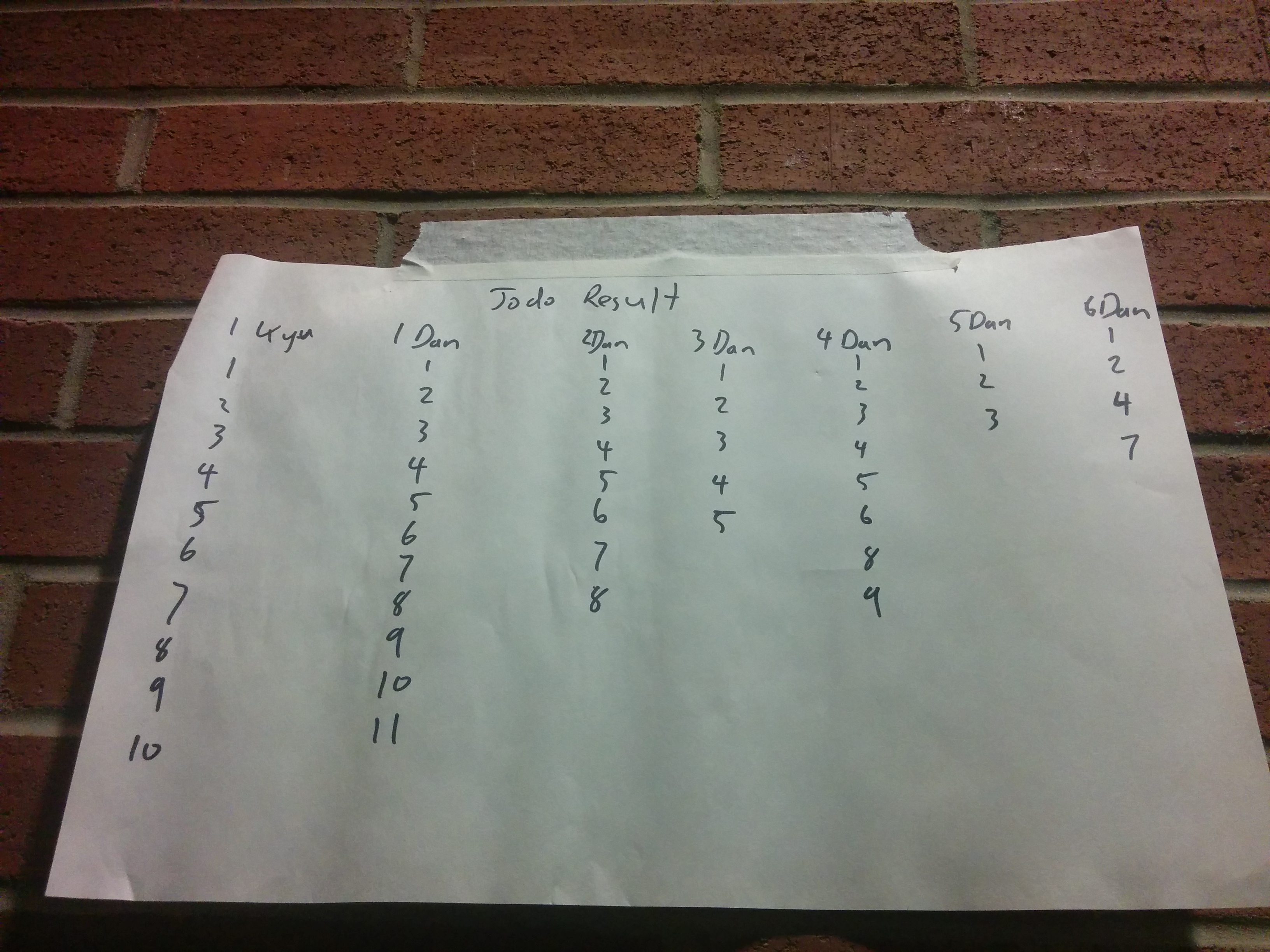 Celebrations were in order and I had much rum. As drinking didn't begin until 9:00 P.M., it's probably no wonder that I was up until around 3:00 A.M. I slept in some the following day, which meant I didn't get a lot of iaido practice in, but I was okay with that. We left shortly after lunch.

On the way home from Guelph, we were graced with beautiful blue skies.

The thing I loved most about the UK sensei was their focus on cooperating with our partners and having fun. The message was why do anything that isn't fun. I felt like this is what the grading focus should often be on rather than a slew of corrections right before challenging a grading. This attitude helped me stay calm despite being in the pair right next to the judges table.

I picked up a few aha moments while practicing iaido and I'm looking forward to working on both arts at home and in the dojo.

I didn't make it to the arboretum. Some year I hope to have the time and energy to check it out.

My thread came while I was gone, so I can get working on my other goals now. Since today was spent mainly on cleaning while the painters were painting my door, I haven't gotten much done yet this week, but there are still two days left. I'm looking forward to getting back to my writing.