Wonder Wednesday: Am I too sensitive?

Today's Wonder Wednesday may be a little morbid or upsetting for some. If you're the sensitive type, feel free to skip this one.

Something I saw during my commute home upset me and made me think about the ghosts that haunt my past. 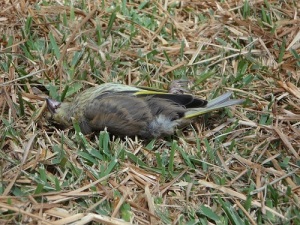 The bird was brown and yellow.[/caption]

A bird. Caught in the hinge of the trunk of the car in front of me. Its lifeless wing flaps in the wind. It hurts me to look at it but I can't avoid it. I want to scream at the driver to free the poor thing. I want to ask them how they could be so oblivious.

Is it that they don't care about the world around them? Are they too engrossed in their own problems to notice anything else? Is the life of another creature worthless to them?

Or am I too sensitive? Too observant?

For a time, I lived that way. Oblivious. I had made myself numb. First, I let someone convince me I was too sensitive. Then, I drank to kill the pain I felt at noticing such things. It was easier to acquiesce than to admit that there was nothing wrong with me. Because that meant it was the relationship that was the problem. And who was I without my relationship?

I became quite ill. In 2010, I was diagnosed with Narcolepsy. In 2012, I began reacting to most things I ate. In 2013, my first vitamin deficiencies appeared.

I almost lost myself completely.

But I woke up one day and realized what was really going on.

If I couldn't be myself, it wasn't healthy for either of us. Indeed, we were growing to hate each other and counselling did nothing to help the situation. We were just too different on too many levels and deep down I think we both knew it. I knew changing things would add more hurt before we could both have a chance at being happy. But I also knew it was necessary.

The narcolepsy disappeared in 2013. That was about 6 months after ending it. Now, in 2016, my food allergies and vitamin deficiencies are almost gone. My immune system needs a little help for now but things are so vastly better that I'm not stressed about it.

But I care so very much about that little bird. It hurts more than I wish it did. And it sucks so fucking bad that I couldn't do anything to help it.

That pain reassures me that I am me once again.

And if someone has a problem with how much I care about something, they can go fuck themselves.