September 03, 2014
Daddy and I trekked up to Northern Québec on the weekend. After Témiscaming, on the way to Laniel, there was no cellular service. This was the second time in my life, since owning a cell phone, that I've ever lost service completely. The first time involved a trip to Smoky Falls, which is an Ontario Power Generation site in between Kapuskasing and Moosonee. I don't mind losing service as I enjoy getting away from technology and just kicking it with nature. I checked periodically for service out of curiosity and in case we ran into any trouble, so I'd know where to run to and call for help. Around km 42, I started to see hints of service. It was just a tease though. The roads were full of hills, twists, and rock cuts. My dad says when you have a rock cut on either side of you, it's called "Hell's Gate". He's Catholic.

I lost service again by St-Édouard-de-Fabre. It became farmlands. Gas prices were insane! 138.9 for regular and diesel was oddly the same. We headed to Ville-Marie, the closest hospital town, so my dad could grab some grub. He had a banana before leaving, but it wasn't enough. He's never been much of a morning eater though. At Brasserre 101, there was a very animated conversation happening at the bar. A lot of hands flying about and swearing (callise, maudit, tabernack). Apparently the conversation centered on busing children and how there aren't many children to bus anymore. French people in Québec seem more passionate in their conversations.

As we traveled, I hacked some portals in Ingress. One can play Ingress in Témiscaming, Ville-Marie, and Lorrainville. We traveled down Highway 63 to 101 Nord and then to 382 Est. I learned that my great grandfather once drove into the Laverlochère church with his truck. I bet there was commotion over that. Our destination was Latulipe-et-Garboury, which is quite different than Latulipe, Québec if you're looking for it through Google maps (about 6 hours more driving). Moffet is the town my dad was baptised in, which is even smaller. The village of Latulipe-et-Garboury has a population of about 300 people. I remember it being so much larger as a child of eight years.

We stayed at Domaine de la Baie Gillies, which is apparently a former sawmill. With no cell service and the location being a couple of kilometers from the highway, it seemed a prime place for a horror story setting. I wondered where my daddy found out about this place and what I had gotten myself into. At least the room was decent. My dad said it wasn't a real hotel room because there wasn't a bible in the nightstand. 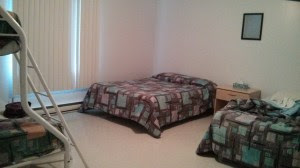 My aunt's home was close to things like the S.A.Q., though it's cheaper to buy booze in Ontario than to get it from that particular S.A.Q. I'm told. Supply and demand...

The first wedding ceremony was at 4:00pm on Saturday and it was a long Catholic wedding in French. The ring bearer kept trying to set the ring pillow on the floor. The poor boy didn't know what to do when people were chuckling. My cousin was the bride.

The next ceremony was at Centre de Loisirs. My Aunt Estelle married her long time common law partner, Leo. Dad thought they looked like Bonnie and Clyde. Here's a picture of the hall: 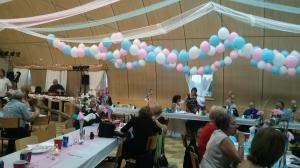 At dinner I learned that my dad isn't homophobic as there was a male couple there from Gatineau. I had a brief panic on food. It can be a scary thing for me. I had beef, mixed veggies (carrots with green and yellow beans), and rice pilaf. Because I eat ultra clean these days, the little bit of onion and celery in the pilaf didn't make me bloat or feel bad. Neither did the Polish vodka I had been drinking since around 1:00pm. I haven't really missed drinking, but it was nice to partake in the festivities. The vodka I bought tastes good without mix, which is great for people with food issues ;)

During the party, I learned that quite a few of my dad's sisters are fiery and mischievous. My mom was never much of a troublemaker, so it's clear I get my feistiness from dad's side. Fun fact: at age 3, I had red hair.

Dad and I left around 10:30pm. After driving from Ottawa on the Thursday, then traveling to Latulipe, I was beat. On the way back to our room, the land was shrouded in fog and it was pitch black. The place was rather creepy since it also didn't have street lights. I had apparently stayed there 25 years ago in the back of our old dodge pickup, which my dad had temporarily converted into a camper with a creative use of plywood. I remember that, but I didn't remember it being the same place. Things look so different now compared to what I remember. It's a quaint campground with canoes and things to rent. Before it seemed like it was just an expansive field and I don't remember seeing the bay. I remember a lot of grass and a large gazebo.

Part of me wanted to see the old Roy family home before leaving, but I decided I prefer to keep those precious memories I have just as they are. It belongs to my cousin that got married on the weekend.

I need to learn French before the next family event. I had cousins I would've talked to more if I could speak French. They were afraid to speak what English they knew and I was timid about using the French I know. We were so afraid of making mistakes, we didn't talk much except through a translator and I know my dad was making some stuff up. He said he wouldn't tell me, so I couldn't get him into trouble with mom. At 70, my dad is still cheeky.

My dad is the smallest of all of the men in his family, so it's no wonder that I am as small as I am. I knew I was at a family reunion because of the abundance of short people haha.

While there, my dad seemed to take on a different side of himself. We drove everywhere though the place was, so tiny that I think my dad normally drives farther for beer in North Bay than the whole of the city. We located my grandparents' graves. My grandmother died when I was 9 and her grave hasn't fully grown over yet.

After about 19 hours of traveling, I'm glad to be back in Ottawa.

I got some novel ideas down on paper, but without Internet I couldn't research them and much of Monday was spent without Internet also as my ISP had an outage. I'm also in the midst of decluttering and painting my living room. I'm excited that it's fall because my writing groups are getting back to regular meetings and I have Can-Con and several martial arts seminars that I'm looking forward to. I have some works in progress to read for writer friends and referee training also in the hopper.