Friday was Canada Day. I had a lovely time with a small group of friends not far from Lebreton Flats. Drinks were had on a deck in a back garden, which became more magical as the night went on and the bats and fireflies graced us with their presence. Though I'm not a big fireworks person, I enjoyed seeing them. It was nice being out of the house and in an area where the convoy people were not.

Saturday brought an evening to network with alumni from Screenwriting. It was really good to meet people I had only previously talked to on Zoom. I enjoyed being outside on a deck in a green space again. I should get some plants for my balcony to make it a more restorative place to be. They will be succulents because it gets full sun and everything else will die.

The fun night was marred by a hateful man who got off at the Lees station just after midnight, looked directly into my eyes, and threw an empty drug vial in at me through the open doors. I spoke to two OC transpo employees and gave them the vial. They took my name and said I could fill out a complaint online. After I left them, I noticed my thumb was bleeding and talked to another employee and he said he would send the supervisor. When none came, I spoke to a bus driver. A friend came and special constables came. I gave a report, description, and showed where I was sitting and where he had been. He had a shopping cart and the train didn't have a lot of people on it, so they are confident it should be able to find him on the footage. I haven't heard anything yet. 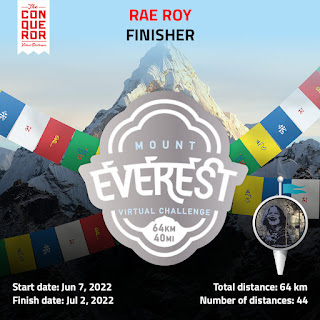 On the upside, I completed the Everest Challenge on this outing and now I'm planning to switch over to a Pacer challenge to check out Paris. I have a hunch learning more about certain areas of France will be good for me since I have ancestry there. And who knows, it may even play into a story one day.

Later on Sunday, I had yummy strawberries in my cheerios and went on with my day, which involved some Twitch channel work with adding a bot to my channel to help block spam and add some fun commands.

Then I had the utter delight to participate in one of Danielle Allard's music videos for her upcoming album release. The video is slated for an October release and I can't wait to see it all together. It was really good to meet a number of the people I'm often chatting with in Danielle's stream and discord.

One of my friends in the Dino community thankfully drove me home, so I could avoid the potential of running into the vial lobber. I refuse to let a deplorable man wreck an otherwise wonderful weekend.

I may need a weekend from my weekend.