February 16, 2020
I've been on a staycation. It started off roughly. The trains went down on the Friday and there was so much traffic that it took nearly 30 minutes to move from my station to the next by bus! In that time, the trains were back up. Mostly. They were still having some power hiccups along the way, which made for a bit of a scary ride home.

The day after, I picked up my Click and Collect item at IKEA. I learned never to be in that area during noon. After I left IKEA, it wasn't long before there was an accident on the highway. It was in my lane ahead of me. I got stuck behind the accident as cars in my lane fled left and right. Some of them did so without doing proper checks and caused more accidents! I decided to stay put until it was really safe to get into another lane. There were around 8-10 all up that lane as I drove carefully past to go home. I live quite aways away from IKEA, so it was a bit scary and I felt really thankful to get home safely and in one piece.

Getting my package inside was surprisingly easy despite the snow and the fact that it weighed almost as much as I do. I hurt my finger and my hip flexor putting it together and in place. I have a nice headboard now though and I swear I'm sleeping better since.

I've been doing a lot of little things around the house like cleaning up my game system area, removing a coat rack that encourage clutter, organizing my movie collection, and catching up on some chores.

I also started the bathroom reno. I've demolished half of the vanity down to the floor boards below. I still have some cleanup to do, but I'll be soon ready to have a plumber do the rest and install the new one. I found sample tiles underneath the base of the vanity, so I can use those to shop for paint colours and to try and find a handful of floor tiles that may look close to what is already there. I doubt I'll find the floor tiles, but it's worth a shot! 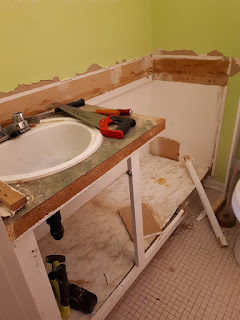 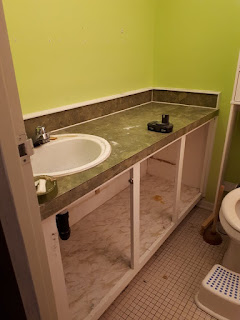 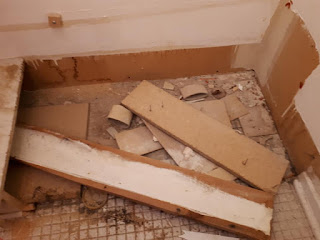 I took a break from everything else during this time and mostly watched a lot of movies. Honestly, with the way the break started, I wasn't wanting to drive much anyway. Plus there were a few really cold days that I was happy to skip out on!

I walked a lot on Saturday when I was out with friends celebrating one of their birthdays. We stopped by Winterlude and saw the ice sculptures. 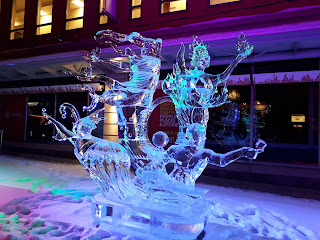 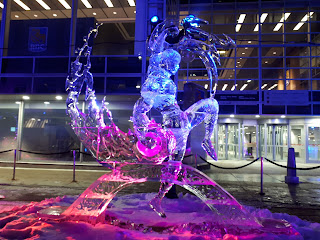 After the libations the day before, I wasn't feeling up to martial arts today unfortunately.

I'm behind on a lot of my chores, but I'm okay with it because I pushed forward on some other things that I've been wanting to get to for quite awhile.

I caught up on a lot of sleep during my break. I also experienced less tingling in my wrists. This is probably due to taking a break from keyboards.

I'm looking forward to getting back to my stories this week.