December 29, 2022
The drive to North Bay was pretty smooth until I was 30 minutes away and ran out of windshield washer fluid. That was the first time that ever happened to me. Luckily, about 10-15 minutes later, there was one last gas station where I could fix that.
Since it's my busy season, I worked the mornings and took the afternoons and evenings to spend with family and friends.
My brother stopped by with a special gift, a new ornament for the tree. 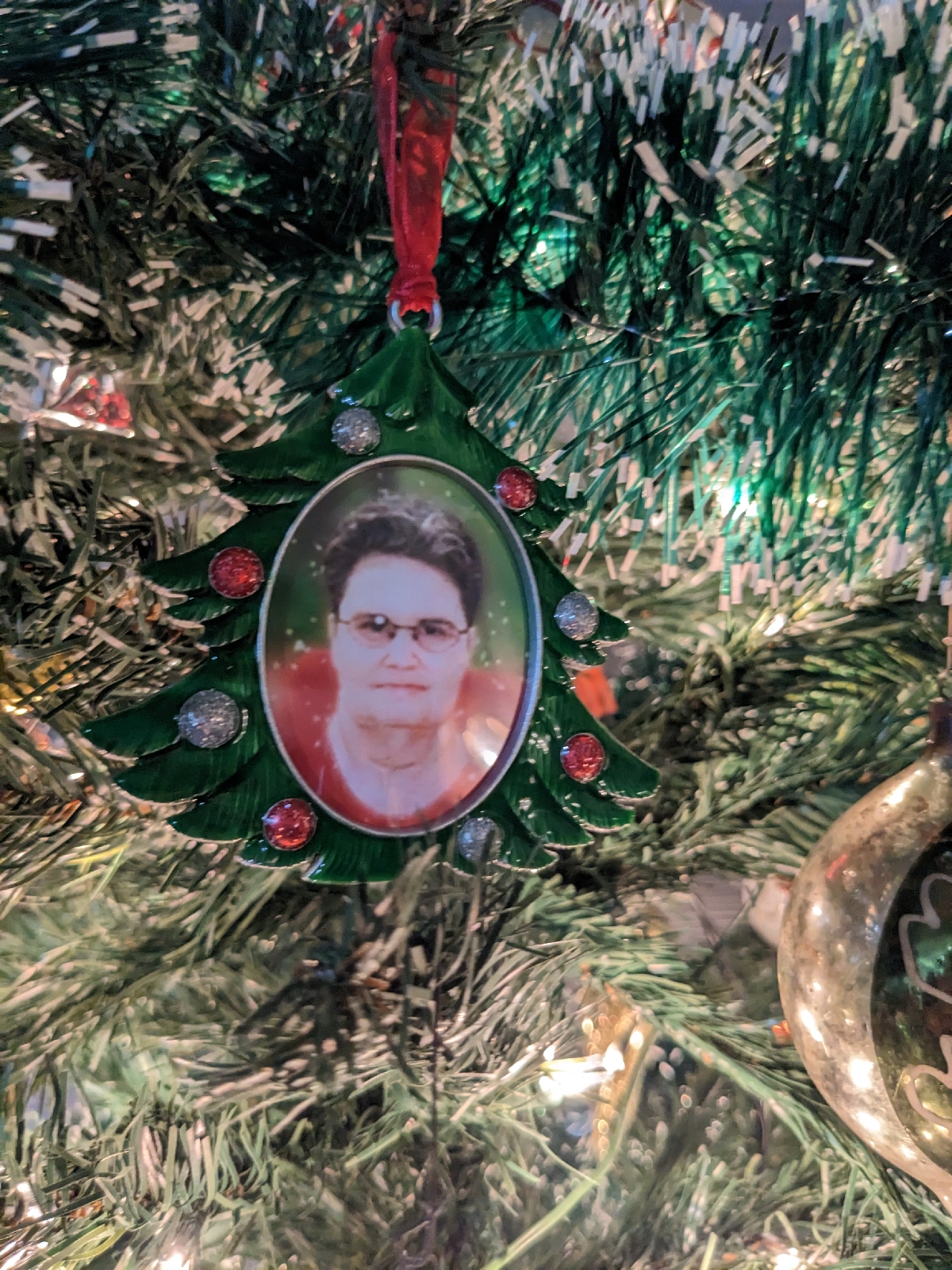 My mom loved ceramic Christmas trees, so it's a perfect way to keep her with us at Christmas. His friend, Fawn, helped him get it made. She has a YouTube channel you can check out here: https://youtube.com/@thethriftyfawn
After that, I visited friends in the slightly rural part of Callander, Ontario. We were having a lovely time catching up and then the evening had a surprise in store. Someone in the area had hit a small deer with their vehicle. My friend's dad skinned and gutted it in around -20C (due to the windchill) weather. It was quite dark by then. It was an odd sight. There wasn't as much blood as I expected there might be. And there was still a lot of body heat coming from within. They may or may not end up with any meat from it as the damage from a car can actually spoil the meat.
The next day, I had a lovely visit with my high school music teacher and choir director. We caught up on the the 20ish years since we last saw each other as best as possible in an hour or so. She's still actively involved in the music community through several choirs and bands. We talked about some of my music related plans and that was wonderful.
I spent a lot of time knitting and watching TV with my dad. I had finished a scarf before leaving, which matches the colour of my nicer toque. I'm currently working on a scarf that uses the colours from the 5 colour lesbian flag. 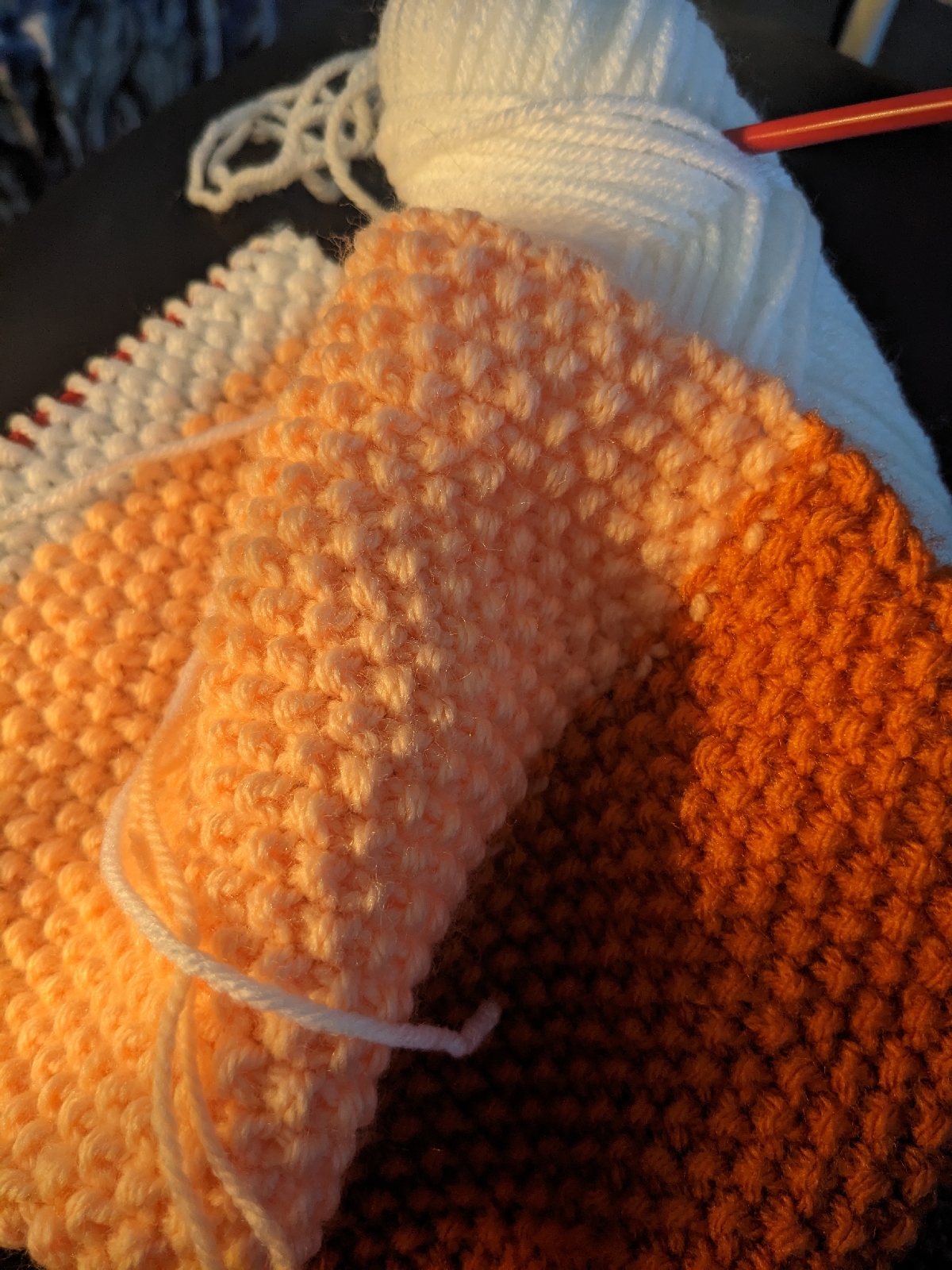 I mention it on my brand new Now page. You can head there anytime you want to see what crafting, life, music, and writing projects I'm currently working on. I feel like this is a better option for me than constant goal posts on the blog.
I also played a bit of Minecraft, though a crappy mouse had me mostly not bothering. Having a break from gaming wasn't a bad thing. There was some ukulele, some reading, and some writing. I did a one pager for a new screenplay idea I got.
I happily found dairy free eggnog that was in stock. It's usually sold out, so I miss out most years. Sometimes small things like that really help.
Dad's dog would come to me every time dad went out for an errand or when he was snow-blowing the driveway. Sometimes he just wanted to be nearby and other times he was huddled closer to me. 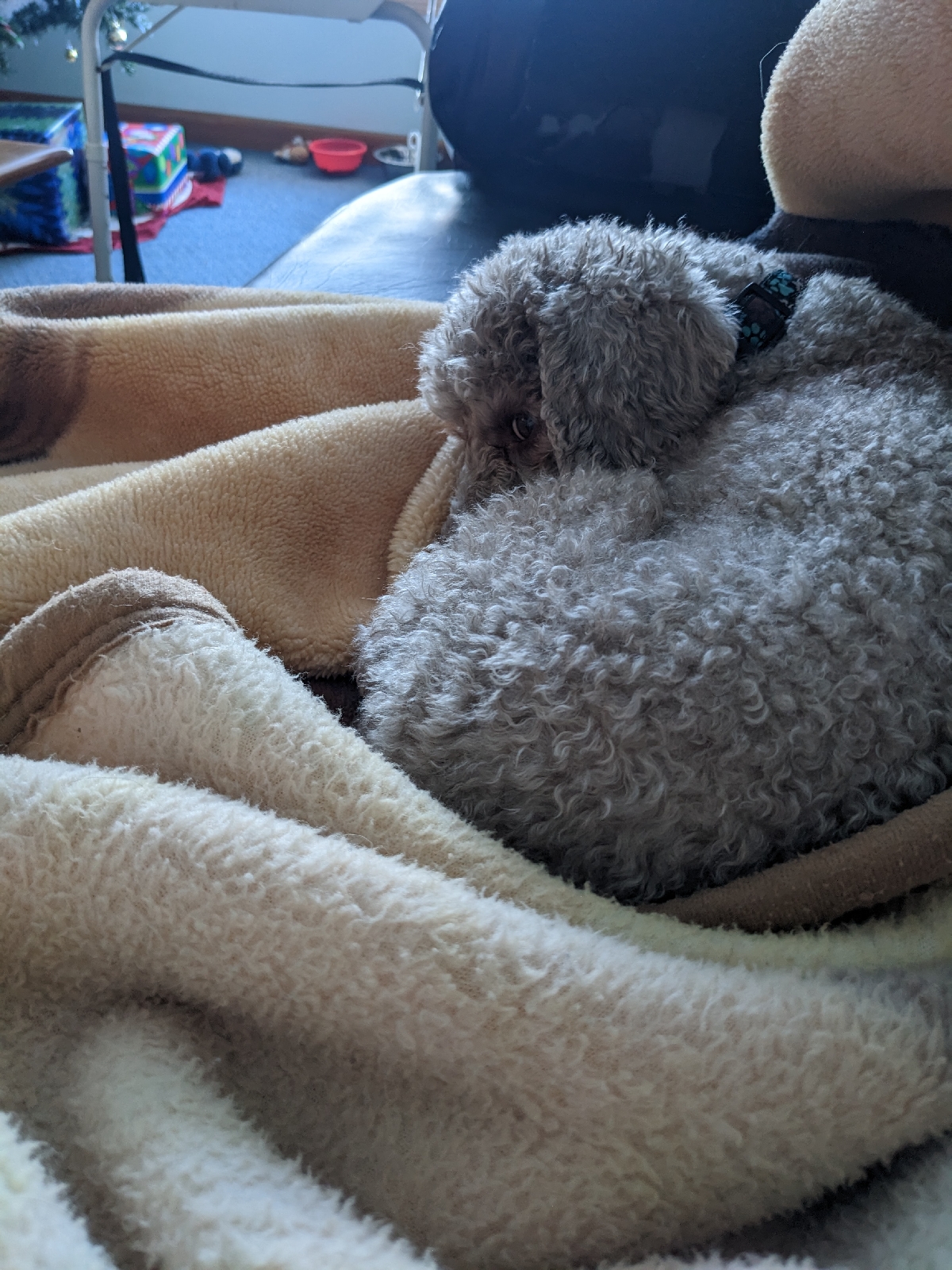 Due to the storm, some plans were postponed until after Christmas. I redid the garland on the tree as I felt it needed a more artistic touch. 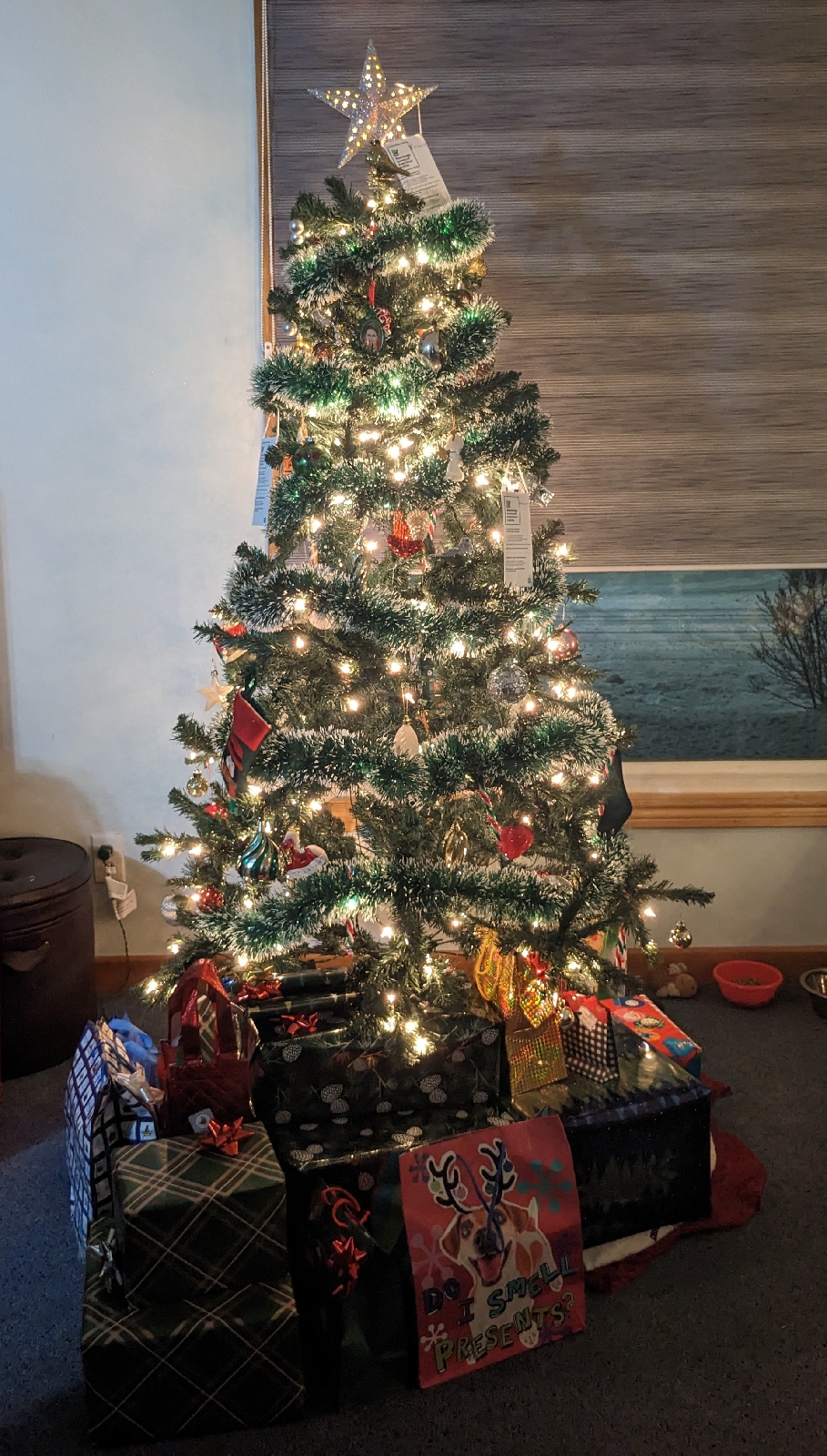 One of the things I loved during the TV watching part of the holidays was an Extra gum commercial. Normally, I'm not fond of marketing, but this one fills my little lezzie heart with joy every time I see it.
Given that my brother works in snow removal for the city, I had no idea what time he would come to open gifts. In the past, he'd get a call out in the morning. This year, he was able to book Christmas Day off, which was really nice.
A car slid into the ditch across the street from Dad's. My brother checked on them and advised getting a tow. It had no ability to be pushed as the front wheels were floating and the back wheels would just spin. Their friend took their kids, checked it out, then waited with them for the tow. It was winched out in about 25 seconds.
So what did I get for Christmas? Aside from some treats, I got a copy of Dario Argento's Suspiria, some stemless wine glasses, a set of short bar glasses, a couple of gift cards, some cash, and a bottle of Writers Tears. 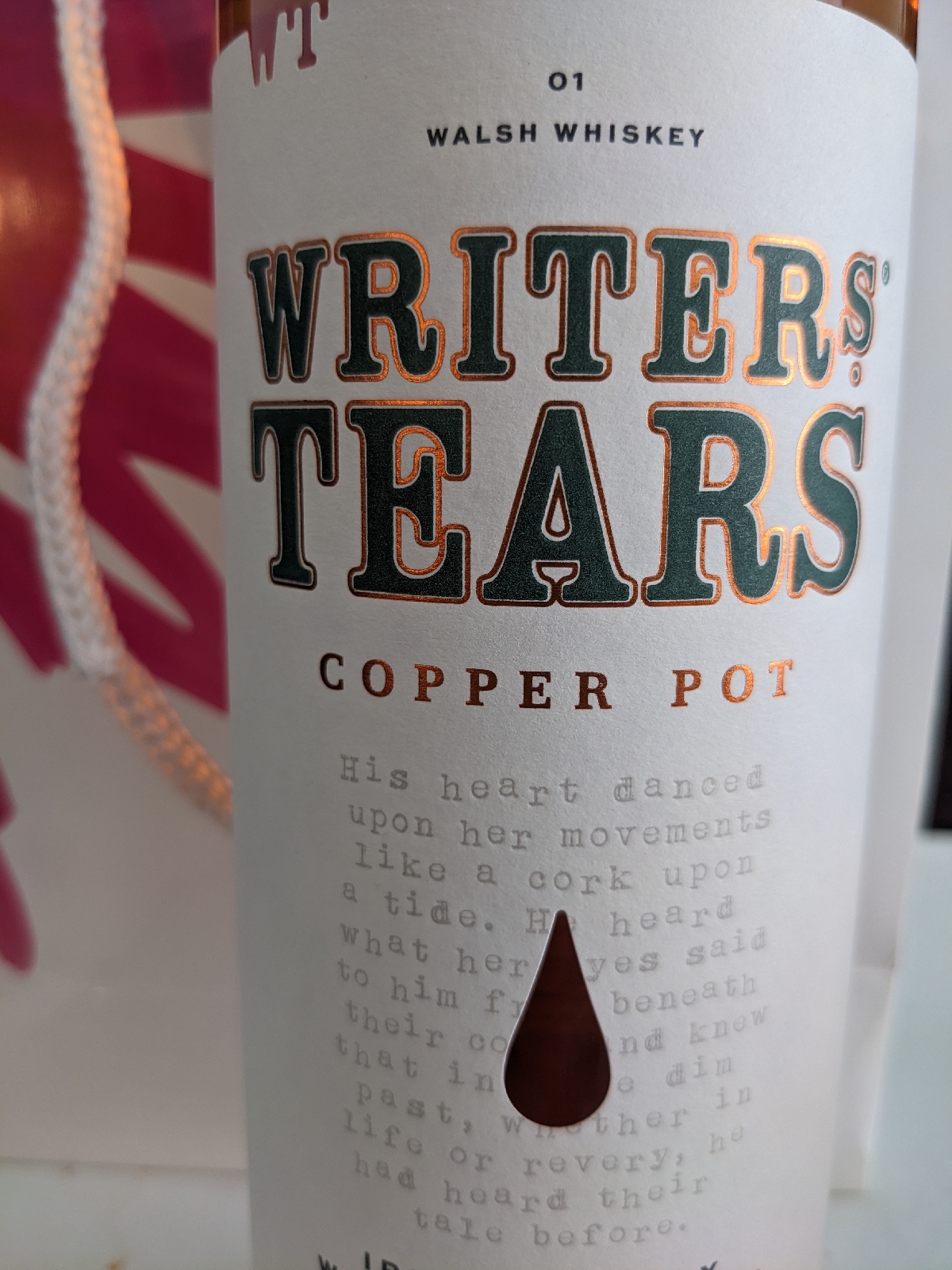 I asked my scriptwriting friends if I should have some when I submit stories/screenplays or when I get the inevitable rejections. They decided both are times for tears. I'm planning to have quite a bit of whiskey in 2023 🤣
Boxing Day was pretty relaxed. I spent more time on my Lez Scarf project and began the fourth colour. Then I visited my brother and completed our movie tradition. We watched The Glass Onion. Prior to the pandemic, we saw Knives Out in the theatre together, so it was really nice to watch the sequel. It kept us guessing for much of the film and I never mind seeing Janelle Monae. As enjoyable as it was, I think the first one was better casted.
On my last day in The Bay, I started out with laundry, so I could have a bit less to do when I got back home. While that was happening, I did a social media clean-up. I moved a lot of the pages I was following to Instagram, so I could keep my personal Facebook for mainly local connections. More on this to come soon.
Next up, I went skating with my OG best friend at a local arena. The plan was then to fit in a visit with a cousin and then with the friend I had to postpone seeing last week. My cousin wasn't feeling well, so after getting some food from gd2go, I was off to visit with my friend who is currently studying nursing.
My trip home was longer than usual. This was partly due to all the snow plows along the way, but also because I had some stops to make. A friend was in Pembroke for the holiday from North Carolina, and it was so good catching up as we hadn't seen each other since around 2017 or 2018.
Next up was a stop at IKEA as I needed bed slats to be able to work on my bedroom reorganization project. I got a few other kitchen items before heading to A&W for a quick bite to eat.
When I got home, however, I had to park in visitors and couldn't unpack my car fully because our snow removal company had just arrived.
There are some other friends I would've liked to catch up with, but the snowstorm messed up those possibilities. Perhaps the next time.
After all of the adventures, I was really happy to get back to my own bed!