I've tried writing this post numerous times, but I needed a break. A long one.

I've been mega stressed out and depressed, so I have been taking a little breather. I was feeling broken, but the experience has forced me to slow down and relax. I've gotten some help including medication for it and I am feeling much better. I'm feeling like myself more with each passing day. I'm sleeping better and have energy again.

I've been scooting and I'm getting back into skating. It's often hard to get out because of rain. Eventually, I want to do tricks on my skates. This skater may not be in derby anymore, but she's still a skater ;)

I have a ton of plans for cross training once winter is here. I'll be hitting up outdoor rinks if they are available, but I'm also going to work on off skate skills that will help me get to doing tricks later on.

This is what I've been missing with fitness. I needed a reason to get fit that I'm passionate about.

This has fallen by the wayside while I'm practicing self-care. I know I'll get back to it, but I don't know when.

Because I've been slowing down for a bit, I'm chipping away at other home tasks like the decluttering. I have repurposed some items and have been hitting this goal really hard lately. I now have a reading area beside my record player and a little bar in one corner. 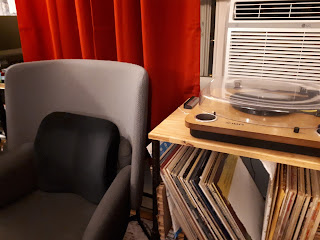 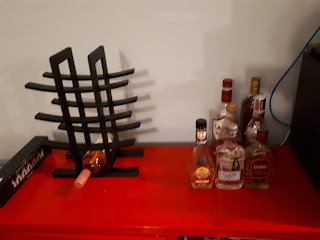 Otherwise in the living room, I have a chair I'm not too happy with. It's one of those zero-gravity lounge types for outdoors and I haven't used it much, but the lounge part isn't working much of the time. I'll likely replace it. My piano and instruments have moved to the other side of the room where they lived many moons ago. I realized I used it more when it was in that spot.

In my office, I have a storage unit planned. It should be here tomorrow. I also have a screen coming to help me separate my office from my living room. It uses tension and goes almost floor to ceiling.

I have been working hard on the bathroom and unfortunately discovered the mold goes up quite high in one stud area. At least it's mainly there, but because the section I've been taking down isn't that big, I have to take a bit more than I had hoped. I was hoping it would be just the lower portion of the wall, because it would have been easier and faster, especially as I'm under 5 feet tall. For a time, I was trying to power through like I did on the rest of the wall, but I reached a physical limit. I've just received hole saw bits, so I can hopefully cut out the remaining chunks with much more ease and finally get to the actual mold killing portion. There are better tools, but this was the most frugal option. Early on, it was also difficult because I couldn't do more than 30 minutes or so at a time between the heat in the sealed off room and getting used to breathing in a respirator. It has gotten easier as the days have begun to cool.

Some friends have been curious about how I'm managing without a bathroom since it is my only one. I have been using a camping toilet. As for keeping clean, I wash my hair in the kitchen sink and I'm just small enough to bathe in a Rubbermaid container. Now, the credit for the idea to use one doesn't go to me. I found an article where another woman found herself in this position and that is what she did though she mostly washed with the sink because she couldn't fit in it like I can.

I've been thinking about the decor in my rooms and what to do with my office and bedroom. My home is getting nicer by the day and it's making me happy to finally be getting somewhere with it.

I've also had to take time out of the reno to clean up the other areas because any day now there will be a check of smoke detectors and such. This wasn't something I was particularly happy to be told, but it is forcing me to kick my decluttering into high gear, which will ultimately be a benefit to me.

One other home thing; I realized it has been my 8-year-old sagging mattress that has been hurting my neck and back constantly, so I'm temporarily sleeping on a little cot while I decide what I'm doing more long term. I have decided I will downsize to a double instead of a queen because it has been extremely hard for me to rotate a queen by myself. I may use Kallax units to DIY a storage foundation for my bed. Then I have to decide on what mattress to order.

Surprisingly, I've actually been working on my screenplay some during all this. I got this Vomit Draft workbook and I'm really loving it for a first draft instead of the computer. I got a second for a play I intend to turn into a screenplay. It has been nagging at me a lot.