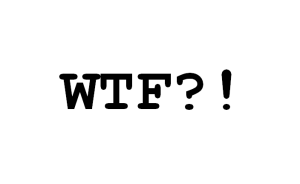 I had a scare last night. I went to the grocery store around 8:00 pm. I've done this before without any issues. When I came out to my car though, there was a man that came out of the shadows and started asking me for money. I refused and had to do so more than once. Lucky for me, I was really close to my car. He kept coming towards me and I unlocked my car, opened my driver side door, locked the car, got in with my groceries, and took off. When I got home a very short while later, I called the store to let them know that they have a dark parking lot and a strange man was skulking about asking for money. I suspect given that he was preferring to stand around in a dark area rather than near the doors that it wasn't actually money he was after.

All I wanted to do was get myself some dinner. Were I a man, wouldn't have to worry about it.

"It takes two to make a bargain."

If someone says no, whether it's to a request for money, food, sex, or anything else, it means no! It absolutely doesn't mean continue asking and walk closer to them.

I'm seriously glad I didn't have to break bottles of pasta sauce on his head. Or bash his head against my car. In the moment, I thought about the pasta sauce, but not using the car itself.

I feel very grateful that I came out of the situation okay. It could've been a lot worse.

I really hope he was caught.

I also hope they fix the lighting in the parking lot to deter unscrupulous individuals from hanging about and preying on women.

Previous to that, I was super happy at finding gluten free ramen. I don't eat the stuff a lot, but having some at home for the odd quick meal isn't a bad thing. I add meat and veggies to it and it makes it a little healthier.

He wrecked my happy moment. He made me feel scared for my life.

Here's to a weekend hopefully free from assholes. And snow, because it's supposed to be spring!

January 27, 2021
Image by Ulrike Mai For quite awhile, I was stuck in nearly every area of my life. I couldn't even think up ways to get unstuck. And I was sleeping terribly, so perhaps there is a connection there. Recently, I became unstuck. I don't know how or why, but lately I see a problem and can think up a work around in seconds. I may not have the energy to execute it, but at least I am getting the ideas for when I do have the energy. Maybe it's because I started a gratitude journal or because I'm beginning to see the light at the end of my renovation tunnel. It could be the hope I've felt since the inauguration happened. Who knows, maybe it's coffee. Speaking of renovations, there has been some slight progress on the bathroom front. They took measurements and will hopefully have materials soon. I don't know when, but hopefully soon. I had a look at the floor I was originally going to get and it wasn't available anymore. The one that was just like it had a pattern
Post a Comment
Read more