I'm working away at The Blood Waitress Club in-between the coursework for the fiction writing course I'm taking. I'm enjoying the course, but not always the reading of other people's work. It's all first draft content and doesn't always make sense. I'm enjoying the other readings though. I'm taking my homework along with me on my family visit for Thanksgiving this weekend.

With The Blood Waitress Club, I'm doing an editing experiment. I'm using The Hero's Journey as a guide to organize the first draft into a story. This is helping reduce the pain of editing so far. I'm unsure if there are other guides like The Hero's Journey out there, but I figure it's worth a try to see if it helps me up my quality and reduce the pain in producing it.

I've been rather busy of late. Last weekend was the Geek Market. The boyfriend and I had gone through much of the market when we decided to do the scavenger hunt. It was a new addition to the market and I enjoyed looking for clues. After all of that, we got three geocaches nearby. I now have 10. I'm hoping to get an earth cache this Sunday.

Also at the Geek Market were quite a few of my friends such as Heidi who owns Decypher, and fellow authors Benoit, Kris, and Patricia.

My boyfriend is keeping me quite busy with kisses. He's also helping reduce my neck pain. He's a massage therapist and an architecture student.

It's strange. I'm not used to having a man who takes away my pain rather than causing me more. I'll get used to it, I'm sure ;)

He got me a gift for our one month anniversary, which happens on Saturday, but I'll be visiting the family for Thanksgiving. He also totally pampered me last night :) 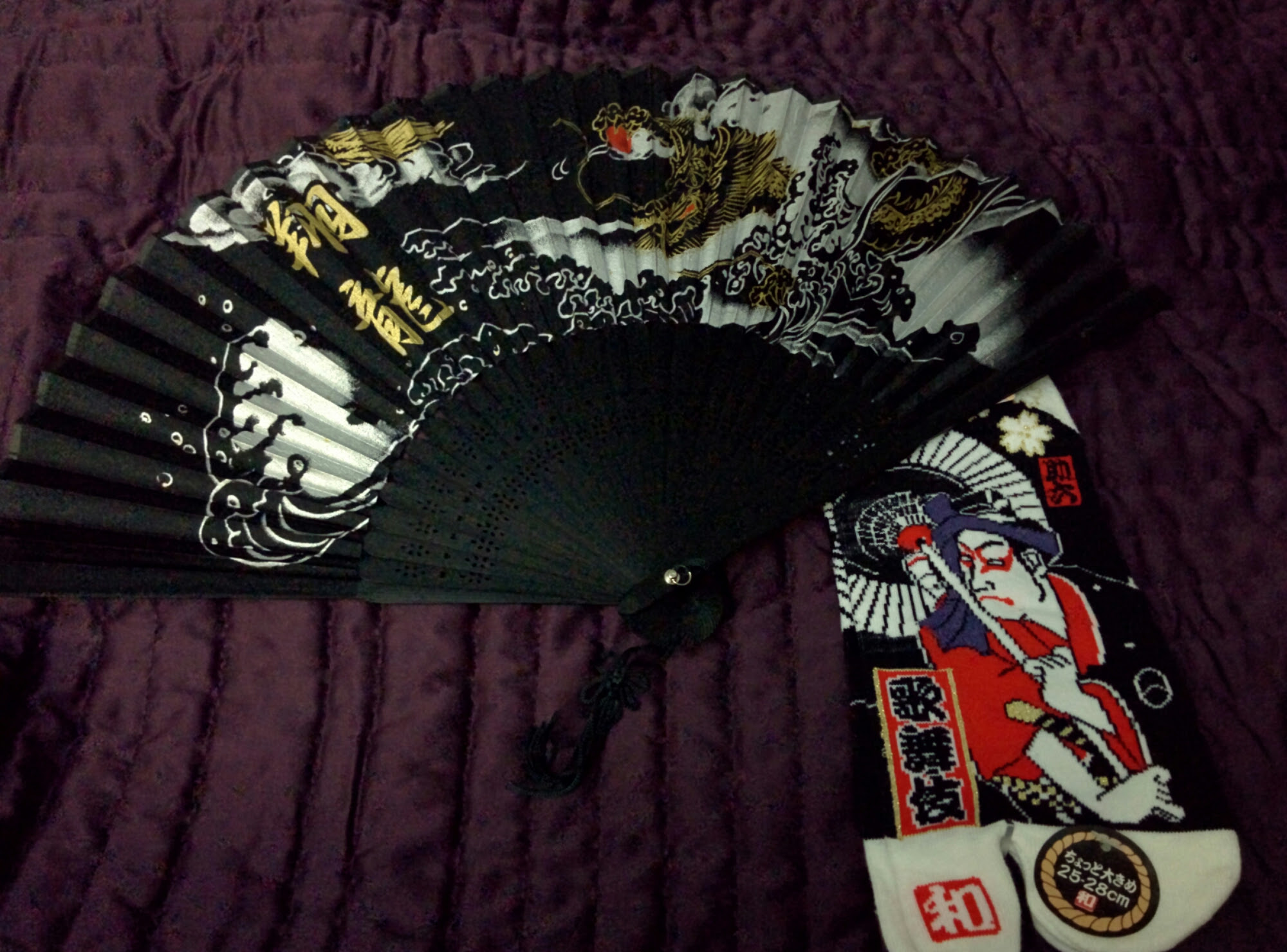 A beautiful fan and a pair of tofugu, or Japanese socks that separate the big toe from the rest of the toes. That fan is going to be great in the summer for the Japanese festival. It's always on the hottest day of July or maybe it just feels that way because I'm in a black keikogi and hakama while demonstrating iaido.

I've taken to dropping the capitalization on the name of my martial art due to the prevalence of sans serif fonts. I'm tired of people thinking I practice something called "Laido" as that isn't correct. It's iaido and it's pronounced "eee-eye-doh", for the record.

I've gotten the results of my neck MRI back and I've got two bulging discs and one protruding disc. No wonder my neck is upset. The X-ray showed my neck is straighter than it should be. I'm missing the natural backwards C-curve that should be in it. The treatment? At least six rounds of physiotherapy, which begin next week. As I've been to physio before for this, I've begun the exercises while I wait. Aside from the injury I've sustained, a bad habit of leaning forward to read screens is a way this happens to people. It ends up compressing the discs and pinching the spinal cord, from what I've read.

I may have to take some time off of iaido because I'm not allowed to do heavy lifting. Six weeks brings us to grading weekend. I'll have to postpone grading until Guelph seminar in May unless some other opportunity comes up first, but I'm okay with that. Necks are kind of important after all.

It's probably best I put a hold on dance class as well. Skipping and hopping around aren't great for the injured spine.

So what will I do? Write, of course!

Also, I'm looking into NAET therapy to rid myself of food allergies. I think that's worth postponing travel for, if it works.

I voted today. I know, and have known for a while now, who I'm voting for, so why wait ten more days? Plus now I don't need to do anything but wait and see how it turns out.

I better get to packing.