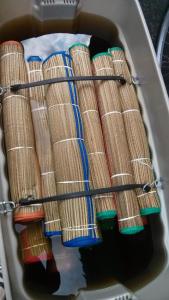 The water helps make the mats feel more like a human body, which is important as Tameshigiri is test cutting. Tameshigiri is where we see how close our technique is to being applicable should we need to whip out our swords and cut something.

Last year, I simply did 2 or 3 cuts. This year, I tested out several specific cuts.

I tested out the horizontal cut that is employed in Ippon-me Mae. This one was done well according to Green Sensei.

The rest of my cuts had issues. I appear to have trouble with following through in my cuts, so my blade would hack into the mats rather than slice nicely. If you're hacking with a katana, you're not doing it right.

I tested out the first cut from Gohon-me Kesagiri, and it was a fail. I wasn't close enough to make proper contact.

I did a centerline cut and the sword got stuck in the mats. I was about to attempt to pull the blade out the way we do for Kyuhon-me Soetezuki, but I realized that part of the point of that technique is to let the body fall and the mats weren't going to go anywhere, so I opted for placing a foot on the stand holding the mats and pulled out that way. It was more fun anyway and something I'd be more likely to do on a battlefield though it's better not to off balance myself by standing on one foot.

In essence, my acceleration is screwed up with my cuts. I was also over cutting when I did cut through, so I have some improvements to make in my technique.

My cuts are a long way from this.

The only problem with tameshigiri is that it's over so quickly. We do it about once yearly, so it'll be some time before I will get to test out my technique again.

I learned some things about where I need to improve and that's what is important. I'm looking forward to grading in the coming months and continuing to improve.